Editor’s note: Within the Octave of the Feast of St Mary the Virgin (August 15), it seemed fitting to offer some theological reflection on Mary.

Alleluia, alleluia. Mary is taken up into heaven: the angels rejoice and glorify the Lord, alleluia.

Rainer Maria Rilke has a wonderful series of poems on the life and death of Mary. On her Assumption, he writes, “Before she came there who would have suspected/that abundant Heaven was incomplete?”

On the face of it, Mary’s Assumption (body and soul) into heaven, is one of the most challenging traditions of the Church. One of my seminary professors loved to say that, for him, the Assumption was just too much of an assumption. It certainly presents a unique obstacle to many of our Protestant brethren. And this is in large part because the event does suggest, in a strange way, that the Resurrection and Ascension of Jesus wasn’t enough, that there had to be something more. Rilke’s question is the right one: who would have suspected that abundant Heaven was incomplete?

But asking that question forces us to deal with one of the basic assertions of the Christian faith: God didn’t need to create us or redeem us, but he did. That is the great mystery of creation. The infinite God who exists for himself alone, in total perfection, desired to share his superabundant goodness with creatures. It is that same mystery that we experience afresh each week when God comes to us in the Eucharist, offering his very self to us, bringing us, through the body and blood of Christ, into the fellowship of the Father, the Son, and the Holy Spirit.

Do we dare to think that this same God would be stingy in sharing that abundance with the woman who bore his Son? Dare we look at the ancient tradition of Mary’s Assumption and imagine that, because of the all-sufficiency of Christ, we do not need Mary?

Jesus, after all, the perfect God-man, needed Mary. Those who have, through the Church’s long history, tried to reduce the role of Mary, always end up reducing the humanity of Christ. And if Christ is not fully human, how can we be saved? But Christ is human, and so without his mother, superabundant heaven was, for Jesus, incomplete. 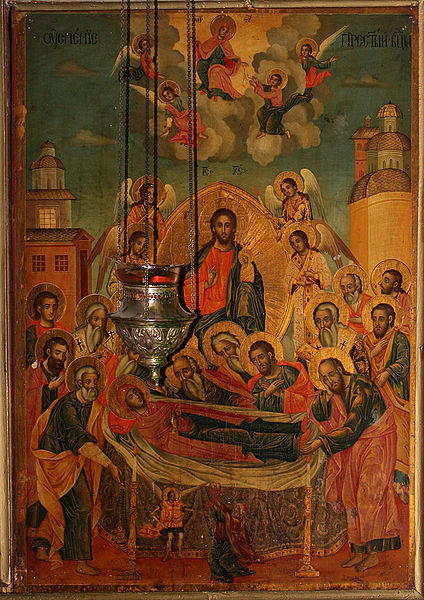 If you look at the classic Orthodox icon of the Dormition, the falling asleep or the death of Mary, you’ll notice that Christ is above her, and if you look closely you can see that he is holding her in his hands. It is a conscious reversal of so many other icons in which Mary is seen holding Jesus in her arms. It is a tender pose. It shows the deep love that our Lord has for his mother. Just as she carried him as a child, he carries her as his beloved creation. He carries her to glory. What good is his triumph if he cannot share it with the one who made it possible?

We are part of Christ’s Body, and we too, without Mary, are incomplete. And God our good Father did not wish to leave us so.

Our mother has been raised to glory so that she might love us more fully, so that she might spend all her days adoring God on our behalf, interceding with that purity that could only come from her immaculate heart.

We have no idea how good this is. We believe, or at least we claim to, that the Resurrection of Jesus is real, and that it is in his resurrection that we have life. Yet how easy it is to trivialize that resurrection! How easy it is to forget, among all the cultural trappings of Easter, that the resurrection means something for us. It is not just as a happy way of coping with death. It is the defeat of death. It is the promise that we too shall be raised to glory, raised to live with God for eternity, raised to the fullest potential of our humanity.

You’ve probably heard some of St John Chrysostom’s Easter homily. It is often read at the Easter Vigil. Think of these words to the risen Christ:

Mary’s resurrection to glory is a sign of the new age, a sign of the defeat of hell. Satan was embittered, for in her he knew again that he had truly lost, that the victory of Jesus was not an abstraction but a reality.

She is the new Eve, the new woman, the mother of all creation. She shows the glory of our inheritance. It is an inheritance that we can hardly imagine, much less comprehend. Even the angels are dumbfounded. Rilke describes her entrance into heaven with breathless words:  “But when… she joined the souls newly assembled… from ambush in her burst out rays so bright, / the angel caught and blinded by them trembled / and cried out in a loud voice:  Who is she?”

She is not some goddess of the old pagan religions; she is not some unattainable model of female virtue; she is us, as we should be and as we shall be.

The image of the Dormition is an icon (19th century) in Kostenets, Bulgaria in the Church of St Michael and is also in the public domain.

This site uses Akismet to reduce spam. Learn how your comment data is processed.